Come rain, hail or shine, nothing could dampen my spirits during a late afternoon bass session.

There’s a sinking feeling when drops of water start hitting your windscreen on the way to a fishing session. Dark clouds were gathering ahead of our planned afternoon bass fishing trip. If the weather could just hold off for a few more hours.

By the time I pulled up at the launching spot, the threatening clouds had eased slightly. It was a steamy, still afternoon on a high tide. I started hearing cicadas and frogs, admittedly in my imagination, but what a wonderful chorus it was. Things were looking good.

That’s when my fishing buddy Greg jumped out of his car. “Were you listening to ABC radio on the way over?”, he said. “No, why?” “The ABC, your E-M-E-R-G-E-N-C-Y broadcaster. Apparently a thunderstorm with potential hail is on the way.”

There’s nothing like a little time pressure to help you focus, and within five minutes we were ready to launch. If we spotted any lightning it was going to be a short trip.

The third member of our fishing party, Tim, arrived and we were on the water shortly afterwards.

This was Tim’s neck of the woods and he was kindly sharing his knowledge with us. As we paddled upriver, I could see Tim looking at snags and overhangs with a familiarity suggesting he had fished them many times before. Every bend in the river held a memory.

After half an hour or so we reached the uppermost section of the river. This was the place. Out came the rods, favourite lures and good luck charms.

There were a lot of leaves in the water which made surface luring difficult. Firing casts at snags and undercut banks, I could only give the lure a few twitches before snagging debris. But in theory a hungry bass would smash my lure when it landed, or after the first twitch.

Unfortunately, fishing theories have a habit of proving themselves wrong. We were putting the lures in all the right places for no result. To add insult to injury, the pitter patter of rain started. Gently at first, then heavier. The rain was set in.

Greg was a little further upriver, casting towards a jumble of boulders separating the main river from a freshwater stream. The stream ran down through the boulders in a series of gentle rapids before flowing into the main river.

“Come over here,” Greg whispered. “I’ve had three casts and the same bass has had three goes at it. Watch what happens.”

And with that, Greg fired a cast into a pool at the base of some rapids. He hooked up immediately and landed a feisty little bass. 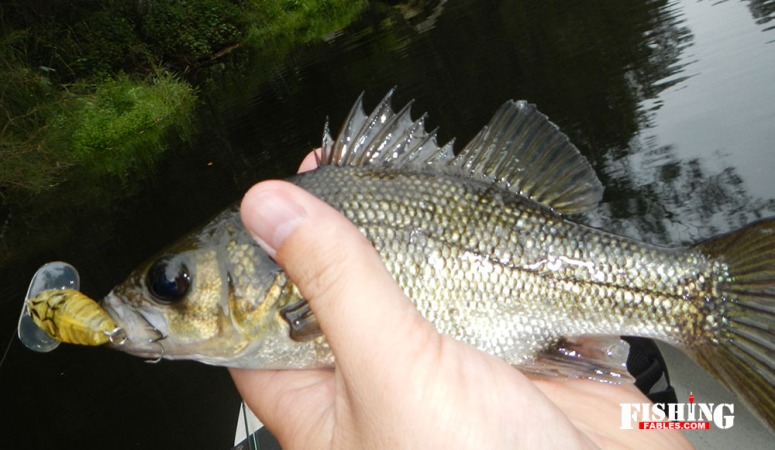 Tim had mentioned it would be worth walking upstream to fish a few of the pools. I wasn’t having any luck in the main river, so I parked the kayak and went for a wander. I took an old Heddon Tiny Torpedo with me. Over the next hour or so, I caught a number of bass. Sometimes casting level to the water, sometimes lobbing the lure from high ledges. No record breakers, but scrappy little fighters that jumped all over my surface lures. Greg and Tim saw similar action. I will remember that little session for a long time.

The rain was pummelling down and evening was upon us like an unwelcome visitor. Our time was up and we were back in our yaks for the paddle home. Naturally we were having a few casts along the way. It would be rude not to.

I saw Tim hook up to a good fish for a moment or two before it flicked the lure. Tim had a few takes on the way back but the hook-ups didn’t come. That’s fishing.

I also hooked a fish for a few seconds before it wrapped me around a submerged tree and spat the lure. I just couldn’t stop it in time on light gear.

I did have some luck though. I landed a cast alongside a snag and after two twitches the lure was engulfed. The bass jumped clean out of the water and whacked the surface with a powerful slap of its tail. The sound was amplified by the stillness of the river. It fought deep and strong before I could net it. 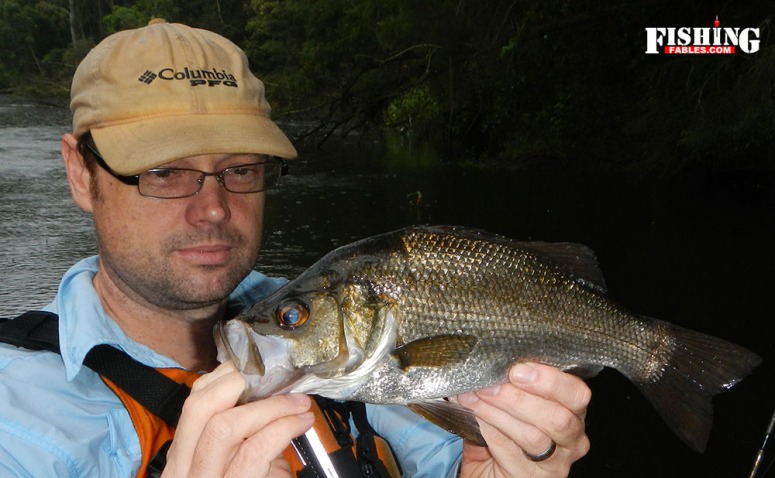 What a wonderful bass session it was, shared with a couple of guys bitten by the same fishing bug. Clearly a cicada.