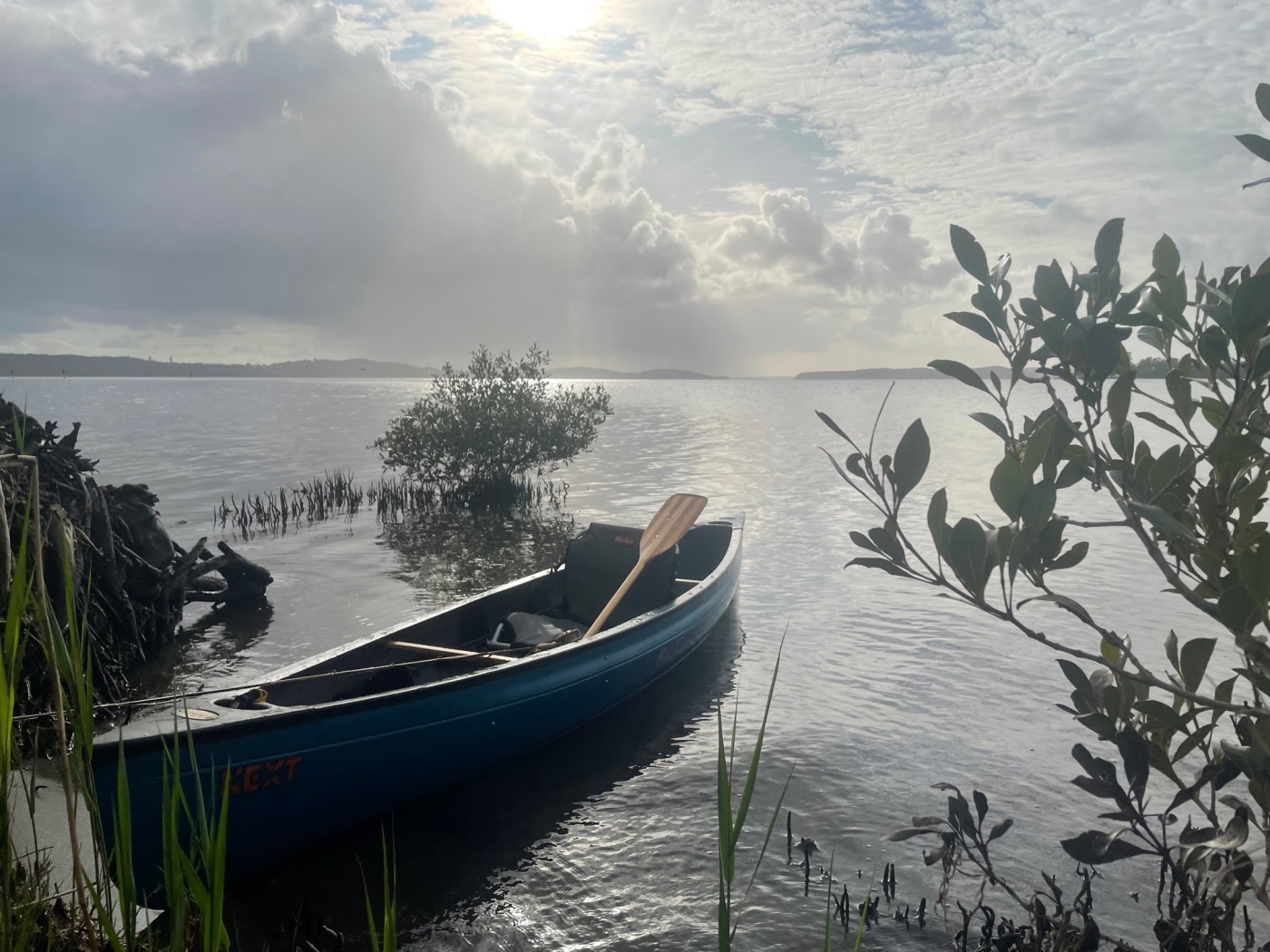 Lake Macquarie is big – really big. Big enough to be the largest saltwater lake in the Southern Hemisphere. It’s located an hour and a half north of Sydney. Mulloway, snapper, salmon, tailor, flathead, bream and whiting are all on offer. So it’s little wonder the lake is a such a popular destination for boat anglers.

I prefer to fish from a canoe, exploring the lake’s shoreline and feeder creeks by paddle rather than motor. I’ve always felt more connected to my environment that way. It’s how I’ve been fishing the lake for more than twenty years – first with bait, then with lure and now with fly.

Interestingly, my success rate over the years has corresponded to that formula – I’ve caught most fish in Lake Macquarie with bait, then lures, with only the slimmest of pickings on fly.

I put my lack of success with fly down to a lack of confidence. Most times I’d land my fly in the same areas as I would a lure – under the shaded banks of a creek or along the sea grass edges of the lake’s shore. While I anticipated a strike with a lure, I suspected my fly would be ignored based on my abysmal track record. It’s a slippery slope because my lack of confidence showed up in the way I worked the fly.

If I wasn’t a believer how could I expect a fish to be?

Thankfully, my most recent trip to Lake Macquarie came with a dose more confidence. In the months prior, I’d made the historic decision to lock my spinning rod away and only fish with the fly rod. My success rate was low after that fateful decision, but with each fish my confidence in presentation, fly selection and retrieval technique improved. I had started to believe in what I was offering the fish. For the most part they still didn’t believe me, but a few of them were gracious enough to.

By the time I arrived at the lake it was late afternoon. The wind was howling and the rain pummeled down. Launching the canoe was impossible. So like a gunslinger waiting for a shoot out at high noon, I held my fly rod, finger twitching, ready for a break in the weather.

Dusk was closing in by the time I launched my canoe and paddled down a creek that fed into Lake Macquarie. I only had half an hour of light so I headed over to my favourite sandbank on the bend of the creek – one that had consistently produced fish on lures in recent years.

The fly I chose was an olive shrimp imitation. The water was still murky from recent rain, and a respected flyfisher from the area had told me darker profiles work better in discoloured water. Turns out, he was right. I managed two bream on fly in half an hour – a feat I would have though impossible a year ago.

That was it for the day and I left the water a happy man. Two more fish on fly notched on my belt – two more doses of confidence to go with it. Just what the doctor ordered.

I was up at dawn the following morning to take on a greater challenge – catching a bream on a surface fly I had tied myself. This time I fished in the shallows of a bay on the western side of the lake. After a slow start I found an area full of sea grass under half a metre of water. The food bream eat live in sea grass so these sorts of areas are worth exploring.

After varying retrieval techniques I stumbled upon the secret formula for the day. A long cast, half a dozen strips to attract any nearby fish, then a pause. The bream would hit the fly a couple of seconds into the pause. I counted seven strikes over the next hour but only managed to hook one.

The fish I missed seemed to nip at the fly rather than smash it. They were tentative, which wasn’t a surprise. It is still early in the season and the cold water means the bream are less likely to hit surface offerings. Would an assist hook have helped my cause? Possibly.

After lunch I managed to squeeze in a final paddle before my time was up. I fished the creek again to stay out the wind that had come up over the lake. Shrimps were hopping across the surface over a sand flat – a clear sign bream were feeding in the area.

Turns out I was wrong. The offending fish was a flathead – my biggest to date. Bigger than anything I’d taken on bait or lure.

So there you have it – Lake Macquarie and its feeder creeks have a lot to offer flyfishers who choose to explore the water by canoe. Just remember to fish that fly with confidence!